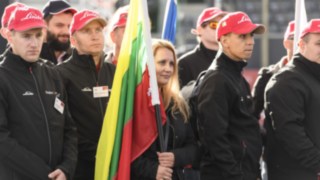 The International Championship has been renamed to NationsCup: The StaplerCup international competition is finally back with a new name, after only the German championships could take place last year. With a total of 11 teams participating, including France, Italy, the Netherlands, Austria, and, of course, Germany, the organizers are expecting some fascinating duels to play out on the challenging StaplerCup final course.

The NationsCup will build on the successful history of the International Championship, which spanned more than ten years. After a two-year pause due to the pandemic, this year’s event will see 11 nations battle it out for the NationsCup, the most prestigious international trophy in forklift truck sport.

The starting field for 2022 consists of teams from Estonia, France, Italy, Latvia, Lithuania, the Netherlands, Austria, Slovakia, Slovenia, and Hungary, and, of course, Germany.

The NationsCup is all about teamwork: The teams taking part will be completing the final course, which was redesigned in 2021 and further optimized this year, together. In addition to the forklift truck, the competition also includes an order picker, which operators will need to navigate through a labyrinth of warehouse racks. The highlight of the run is still the Weber Hero ramp, which operators have to safely traverse, while balancing a tower stacked several meters high. The team coordinators help the operators to remain within the course boundaries, among other things.

The German team includes some particularly experienced and successful forklift heroes, including reigning German men's and women's champions, Markus Zenger and Melanie Holl. Together, they bring with them more than 15 years of StaplerCup experience. Oliver Neukirchner from the company TeamLog, which won last year's Company Team Championship, will be in charge of team coordination, while, TeamLog is also providing another operator for the German team in Eduard Kismann.

Germany is far from a newcomer when it comes to international forklift sport. German teams have already won the international competition nine times in the past, and Germany is way out in front of two-time winners Spain in the all-time table. Whether or not one of the top favorites will emerge victorious from the arena again this year remains to be seen, as some countries will be taking part for the first time in 2022 and could spring a surprise.

“We are delighted to be able to hold an international team competition again this year. The number of teams taking part this year once again demonstrates the popularity of forklift truck sport here in Germany and in other countries. With the new name for the competition, we are continuing with the evolution of StaplerCup, which found a fantastic new home in Aschaffenburg’s f.a.n. frankenstolz arena in 2021 and, thanks to the new course design, is now even more exciting and appealing,” says Torsten Rochelmeyer, StaplerCup Tournament Director.

This year’s StaplerCup finals will take place on October 28 and 29 in the f.a.n. frankenstolz arena in Aschaffenburg. The NationsCup will be held on the first day (10/28). Entry is free of charge.

StaplerCup was first held as an all-German championship in 2005. Since then, almost 30,000 competitors have registered for the event, which puts precision, speed, and overall mastery of the forklift truck center stage. In 2007, the event was expanded to include an international team championship, which will continue from 2022 under the new name “NationsCup”. There has also been a Company Team Championship since 2008. Since 2015, 12 female forklift operators have also competed each year in a separate competition to become the best woman behind a forklift wheel.

The priority for event organizer Linde Material Handling is to improve safety in warehouses and logistics companies: The idea is to develop operators’ skills and awareness in order to prevent accidents in the workplace.

Each year, thousands of spectators enjoy the event, which switched from Schlossplatz in Aschaffenburg to the f.a.n. frankenstolz arena in 2021. As well as several days of forklift truck action, the StaplerCup final is also renowned for its brilliant closing concert, which has previously featured musical greats, such as Michael Patrick Kelly, Michael Schulte and Culcha Candela.

StaplerCup has won many awards in the past in the communication and business sector, including the Gold PR Award, the International German PR Prize and the international title of “Best European Sport Event” from EuBEA. In 2013, StaplerCup won gold and the highest accolade of “Best of Show” at the renowned American GALAXY Awards.