Forklift action in the Company Team Championship and the NationsCup: Day One of the StaplerCup 2022 Sees the First Champions Crowned!

The first day of the 17th StaplerCup final called for perfect teamwork and strong team spirit from the competitors. The new champions in the Company Team Championship and the NationsCup were crowned on Friday. Enthusiastic spectators watching in person in the f.a.n. frankenstolz arena in Aschaffenburg and those watching online shared the thrills of the event with the teams and nations taking part. 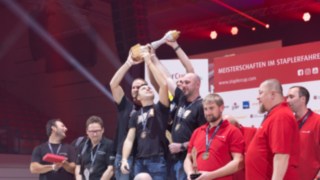 The first day of the event started with the Company Team Championship. This year, the field of competitors was packed with well-known names, from BMW to Caterpillar, and from Continental to Würth, all with their sights set on the trophy currently held by defending champions Teamlog.

Some of the big names, such as FRoSTA and Caterpillar, went out in the preliminary rounds, which marked the end of their competition. In addition to defending champions Teamlog, BMW, Motherson, Würth, and Grüner Systemtechnik also made it to the semi-finals. There, five exciting head-to-head duels determined which teams would be the two finalists. Grüner Systemtechnik and Teamlog were successful in making it to the final—a pairing which will not be unfamiliar to forklift fans. The two company teams had of course met before in the 2021 final.

The big rematch started at 5:30 p.m. An ambitious start saw Grüner Systemtechnik quickly take a significant lead over Teamlog. Grüner were extremely focused as they drove onto the Weber HeroRamp first and their victory looked certain, however this was not to be. When reversing the order picker into the parking space, the driver failed to see one of the side lines in the heat of the competition, which led to the Grüner Systemtechnik team being disqualified. Teamlog now held all the winning cards, tackling the Weber HeroRamp with a cool head and a steady hand, and once again clinching the title with a confident performance.

We would like to congratulate the Teamlog team on defending their title in 2022! It was a very well deserved win!

Slovakia Wins the NationsCup for the First Time 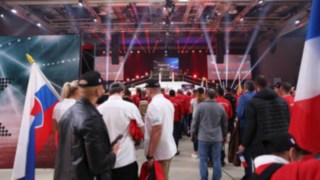 2022 also saw the return of a multi-country competition following a three-year hiatus. In the NationsCup, 10 nations competed to win the most coveted trophy in international competitive forklift driving. The German team, nine-time winners of the competition under its previous name of the “International Championships”, were of course among them.

There was plenty of drama in the preliminary rounds. Germany and France opened the NationsCup and just a few minutes into the run it was announced that Germany was disqualified! The audience in the hall were in a state of shock. Only the video recording could shed light on the situation. Following a brief consultation, the adjudicators decided that the German team’s run had to be repeated as one of the course elements had not been secured correctly. During their second run, Markus Zenger, Melanie Holl, and Eduard Kismann effortlessly delivered an impressive lap time.

Further exciting pairings awaited spectators in the semi-finals: Estonia vs. Germany, Netherlands vs. Slovakia, and France vs. Italy. The favorites, Germany, ran out of steam when faced with the strong Estonian team. The Italians, who in the past had held the title of “International Champions”, also failed to make it to the final. At around 6:00 p.m., Slovakia and the Netherlands lined up against each other, having previously delivered a breathtaking head-to-head race in the semi-finals.

3, 2, 1, Go: The two nations leaped into battle once again. The two teams drove onto the Weber HeroRamp at virtually the same time, still side by side. The tower, which had to be balanced on the truck while traversing the oversized see-saw, did not pose a problem for the opponents either. The victory was not decided until the final sprint for the line, where it went right up to the buzzer, and where Slovakia were able to secure their first NationsCup title. Well done! 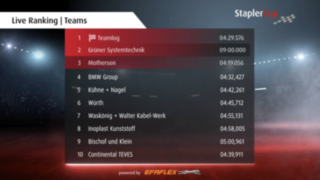